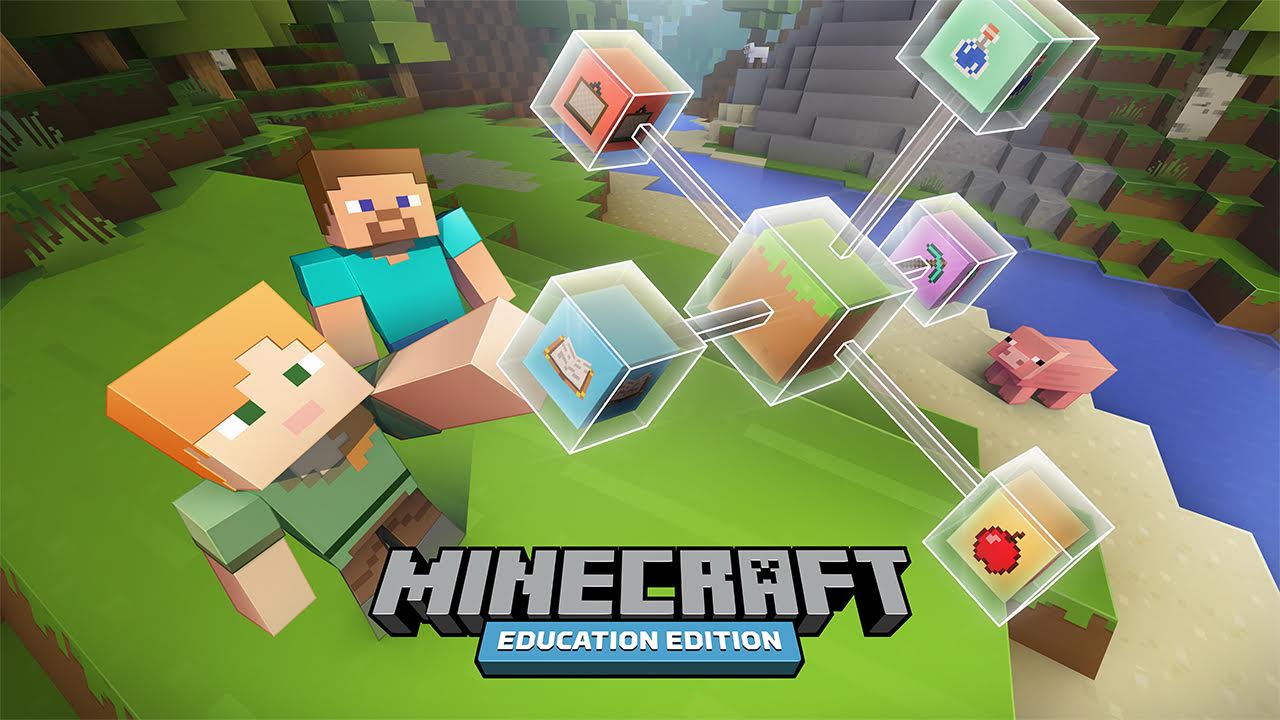 The following blog post was written by Andrew Robertson of Microsoft UK. I work very closely with Leigh Wolmarans, and when Microsoft heard about the great things Leigh is doing with Minecraft they wanted to find out more. Andrew contacted myself and Leigh and arranged a telephone interview to find out about how Lings Primary are using Minecraft, and what was involved during the setup process. Below is the final outcome.

Act I: Starting from nothing – Lings Primary School

“Build it, break it down, rebuild it. That’s probably what I love most about it… When you watch a Minecraft lesson here, one thing that always takes me aback is the level of collaboration, communication and problem-solving skills on display. All those skills that will make them employable.”

And as a self-confessed gamer, it wasn’t a huge leap of imagination for Lings Primary School Headteacher Leigh Wolmarans to see the potential impact that Minecraft could have when blended with the academic curriculum.

But before we get into the detail of what the students are achieving through Minecraft, it’s important to understand a little bit about the recent history of the school, and the socio-economic circumstances of those at Lings Primary.

With 55% of students receiving free school meals, a third involved in social services or child support programmes, and the school finding itself in the top 5% of the social deprivation index, it will come as no surprise to many that in 2010, Lings Primary was listed among the worst 250 schools in the country. Speaking with Leigh shortly after Easter in 2017, he describes the last six years as a journey of ‘building a community’.

“These are all factors you’d associate with a failing school…But having such a low starting point does often give you the freedom to really try something different.” 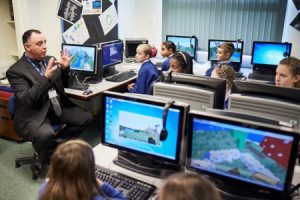 By building and running a ‘Creative-Connective’ curriculum, Lings Primary assembled a faculty that contained specialist teachers in creative subjects, and put creativity at the heart of learning. This approach affords students the opportunity to forge their own learning pathways as they develop the skills to think through problems. Many projects see the whole school working from the same source material, further strengthening the feeling of community between different year groups, and giving a soft introduction to the type of departmental setup typically found in the workplace.

However, no educational experience – no matter how progressive or rooted in technology – would be complete without including the works of a certain William Shakespeare in some form or another! In fact, Lings Primary is aligned to the Royal Shakespeare Company. With an emphasis on creativity, and importance placed on performing arts such as music, dance and drama, there is plenty of scope to link different subjects and age groups together over the school year by basing projects on some of The Bard’s more recognised love stories, comedies, adventures and tragedies.

So how did Minecraft find its way into the classroom, and what would you need to do?

After attending MINECON in the summer of 2015, Leigh set about with MinecraftEdu on 30 machines. After great success here, he joined the beta group for Minecraft: Education Edition in 2016, and then in December of that year enlisted EasiPC to help with the further integration of the game-based learning tool within the school’s digital environment.

EasiPC works with hundreds of schools on their IT systems and infrastructure, including those within the Northampton Primary Academy Trust (NPAT), and it was Paul Dredge (also a #MIEExpert) who took the lead on the deployment of Minecraft: Education Edition at Lings Primary:

“It was very easy to do, and I was actually somewhat surprised at how easy it was. I purchased it through the Minecraft: Education Edition website, which links into to the Microsoft Store for Education, and then I deployed it to the necessary users by simply attaching the licences to their existing Office 365 usernames and accounts that were already provisioned for each school.” 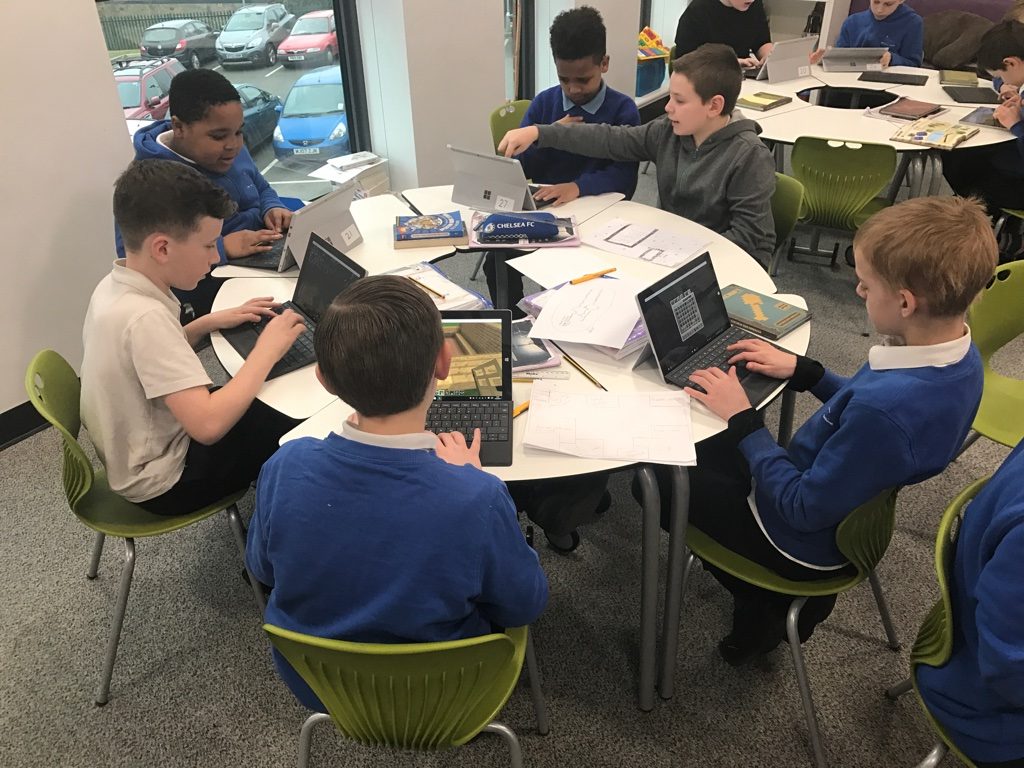 Working more broadly across the NPAT, while all the schools function independently, they all belong to the same tenancy. These schools include Weston Favell, and Microsoft Showcase School Simon de Senlis Primary. For larger scale deployments of Minecraft: Education Edition on new devices, all Paul and the EasiPC team had to do was go through the same easy process of purchasing the licences and applying them to the necessary Office 365 accounts.

“When setting up new Surface 3s (300 across NPAT) and other devices, I added the install of Minecraft: Education Edition into the build process of the devices. This saved time, as once the devices were set off to build I knew they would finish building without having to do any work afterwards. Software like Office 2016, Minecraft, Scratch etc. were installed while the devices built without any need for user input.”

Like Leigh, Paul is fully aware of the creative potential that Minecraft can unlock within students – and indeed teachers – when used thoughtfully:

“I use it a home with my kids on the Xbox, and see the benefits first hand with them and through schools as well. It’s a great resource to add to teaching… The capabilities within the actual programme are endless really, and it covers all sorts of subjects. Having previously been a user of MinecraftEdu, moving to Minecraft: Education Edition brought many new features and possibilities with it, such as the camera and portfolio, and the teacher controls within Classroom Mode.”

Act III: No Silver Bullets – Break it down, and rebuild

Bringing the focus back to Leigh’s comment about ‘build it, break it down, rebuild it’, this critical thinking approach is crucial when it comes to the successful use of technology, and the importance of being clear on your objectives.

Leigh and Paul are congruent in the assertion that there are no ‘silver bullets’ when it comes to the use of Minecraft (and technology at large) within education. Both feel that there is a tendency to hope to see change ‘out of the box’, whether it be a device, an application or a community. If used as a substitute for teaching and learning, technology can become a distraction or a stagnation point:

“When you bring Minecraft into the classroom, it has to be underpinned by good teaching and learning. My job is to show the kids when to switch the computer off.” Leigh Wolmarans

“The main barrier I see is that a lot of teachers just view it as a game – they don’t see the benefits of using it within education. But once they’ve seen I in action they start to realise the possibilities.” Paul Dredge

When it comes to the Shakespearian projects at Lings, the whole school will be working from the same source material, but different years will tackle different parts of the story. The current project is based on The Tempest, and for some students that will involve ‘analogue’ activities such as dance, music, or creative writing, but for others that creativity is channelled through technology. For instance, one class has been challenged to use Minecraft to build the island setting where the play takes place, based upon their interpretation of the characters’ descriptions throughout the script, and furthering and understanding of anther curriculum subject – geography.

But it’s not all about trying to make centuries old literature ‘more fun’ to study, it’s about using technology to facilitate the development of the 21st century skills that these young learners will need to thrive in tomorrow’s workplace:

“If you pair students on a task, their collaboration, communication and problem-solving skills really come to the fore. Tell them to build a space station in a day – the children instinctively start to project manage and problem solve. They also start to question each other, challenge each other – ‘why did you put that there? Have you tried this?’ and so on and so on… They can go away and build afresh having learned from their last attempt. And this is why I love Minecraft – you can build it, break it down, and rebuild it. There is no limit.”