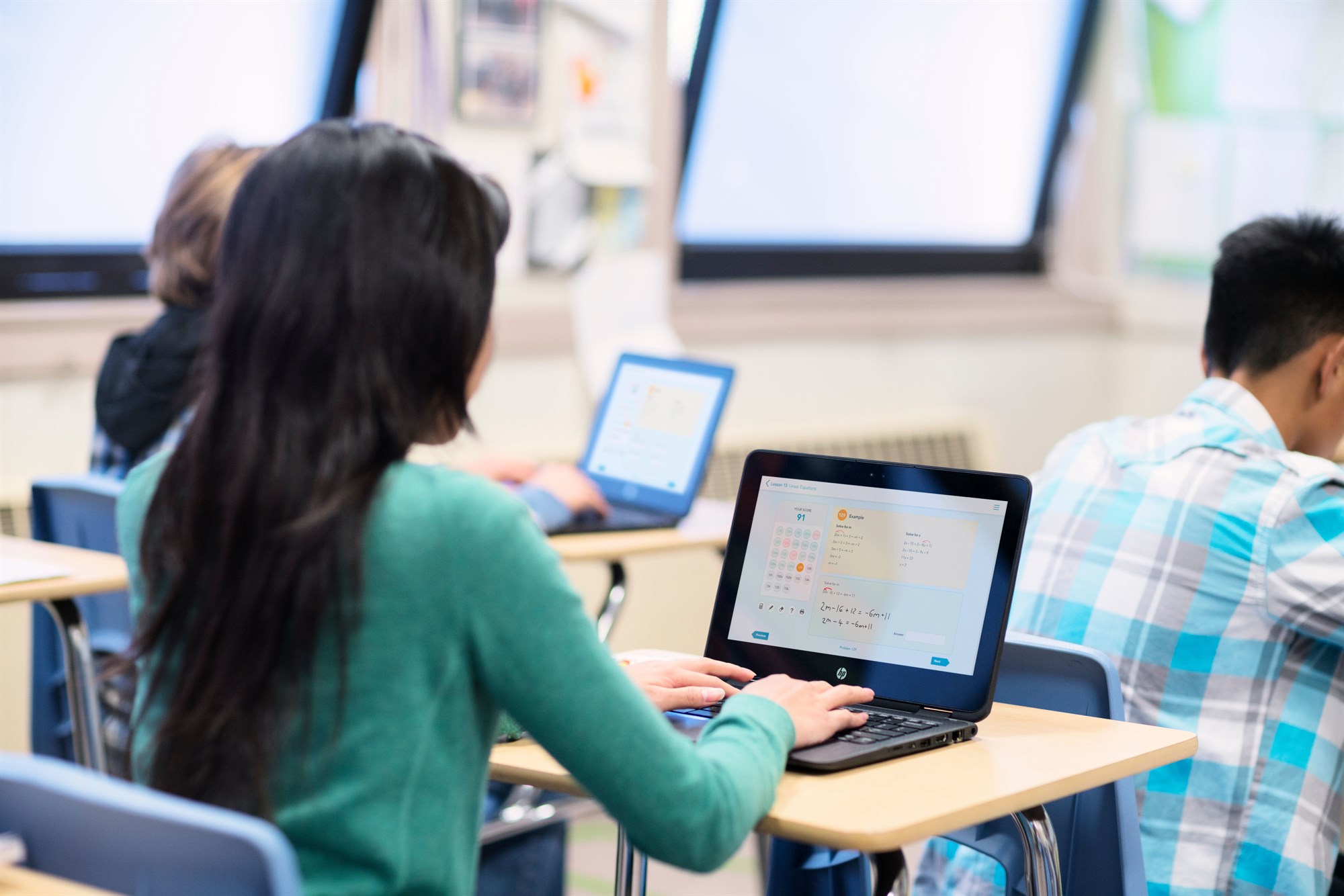 When your school spends a lot of money on mobile technology in the classroom what is your worse fear?  The device breaking from either a student dropping it or it being knocked off a desk. As a teacher you are always worried about students taking care when using a device; when a student suddenly stands up and walks around the classroom with one, you find yourself nervously telling the student to sit down with it. I often visit schools and get greeted with a handful of devices that either have cracked screens or are accidentally damaged. There is no way around this problem unless you purchase a laptop that is specifically built to withstand a daily rugged use. These normally come at a high price and, because they have rubberised casing and reinforced frames, you lose that stylish look of the device. Yet, these devices are great for the classroom. They can withstand being dropped and you have the backup of knowing a tank could drive over the device and it would stay undamaged, but wouldn’t it be great, though, to have a device that could deal with the daily use of the classroom and take away the worries a teacher has regarding the device being damaged?  One that also keeps that stylish look and has an affordable price tag?

When Microsoft sent me the HP ProBook x360 11 G1 Education Edition, straight away I could see it had a slick design, being super-thin and lightweight – something that rugged devices are usually not – but also having the rubberised protected edging. Could this be the device that offers durability and design? 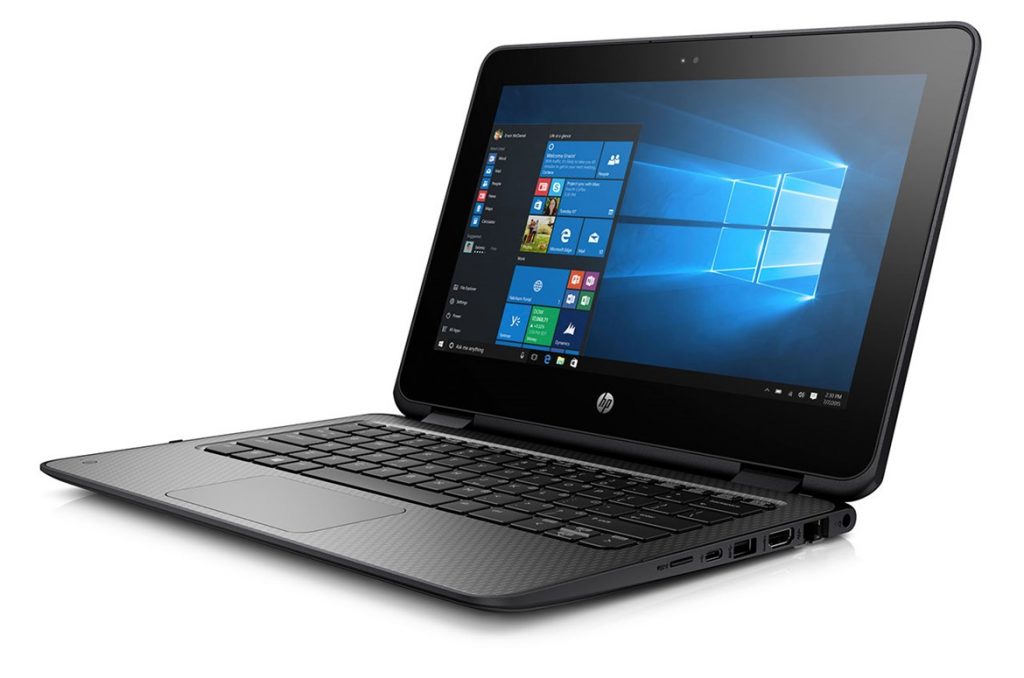 The x360 comes in a range of colours and this particular one was an eye-catching red. When I opened up the device, I was again pleasantly surprised that it had a smooth palm rest, which continued the attractive red design. I could see that this device was built to survive rigorous use in the classroom. The outer casing had the reinforced rubber edging, the 11″ touchscreen is made of gorilla glass 4 and it also comes with a spill resistant keyboard. This device is designed to protect against bumps and bangs; it also passes the military standard tests for devices. The device is not just a laptop either, as the screen folds around into that familiar 360° position, it is able to double up as a tablet device. Yes – it’s a little bulky as a tablet but it was still comfortable to hold in my hand and use. It also allows you to position the device in a number of ways so you could have the screen positioned in a tent mode or completely flipped over and flat on a desk like a tablet. I did put the device to the test of being dropped, applying pressure to the screen and twisting the device and it withstood all the abuse I gave it, so I am highly confident that it will last and withstand the daily use within a classroom.

This device does come with all the latest and greatest in terms of ports and connectivity. It has a full size HDMI port, 2x USB 3.1 ports, an all-new USB C port, a Micro-SD port, an ethernet port and a headphone jack. It also consists of two cameras, one front facing above the screen and one on the palm rest so when you flip the device over into tablet mode it gives you the choice of having a camera on the rear; this is something I was impressed with as it’s very rare that you get a rear facing camera when using a flip device. The device also supports the use of the HP Active Stylus to give you the ability to tap or touch when using the x360. 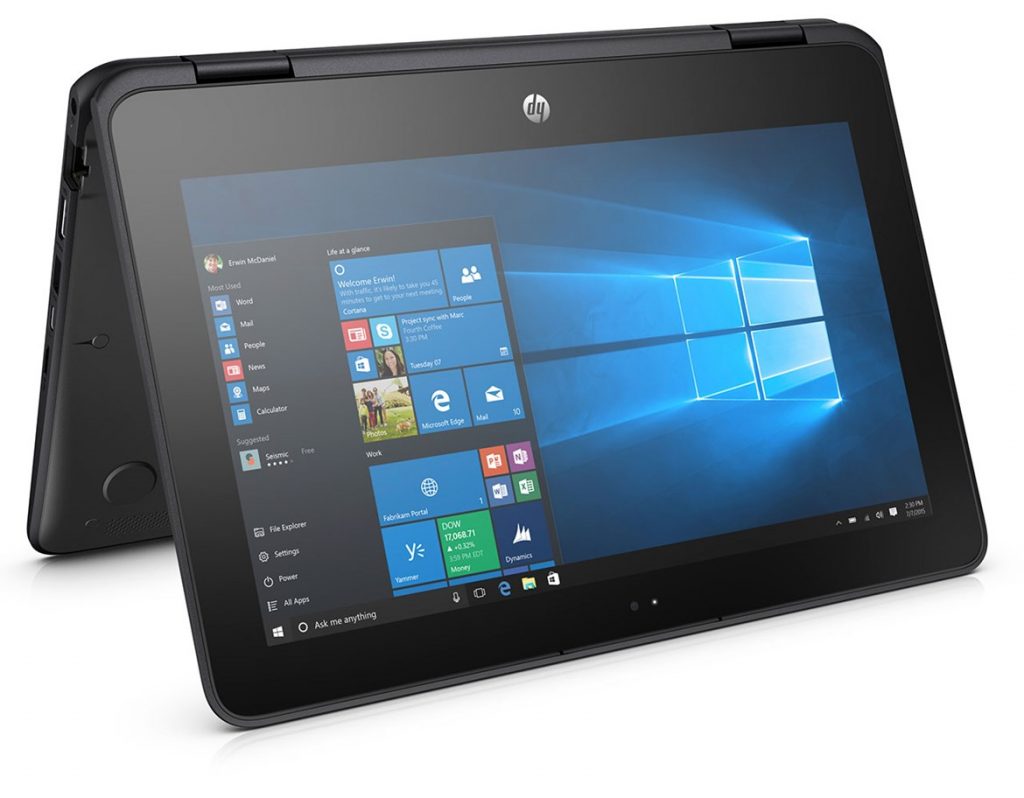 So, the device has the durability needed in the classroom, the sleek design, mixed mode use and all the ports you’d need for daily use, but what about the specification of it? The HP x360 that I was sent came with an Intel Pentium N4200 with integrated Intel HD graphics; this processor has the capability of running at 1.1GHz and consists of 4 cores. It also has 4GB of memory and a 128GB SSD hard drive. All the capabilities to run smoothly in the classroom either as a standalone device or joined to your school’s domain. The battery life would also see you through the whole school day without charging, HP stating it will last up to 11 hours. To put the device to the test of a student’s use, I gave it to my 5 year old son and 7 year old daughter and got them to use the device. Straight away my son wanted Minecraft installing on it and he engaged with playing, the device coped perfectly, running the full version of Minecraft and then he tested it with the Windows 10 version in it’s flipped tablet mode. My daughter, who has a more creative interest, used it as a touch device; drawing pictures on it using her finger on Paint 3D. Both of them enjoyed their experience with the device and I was able to let them use it without the worry of them breaking it due to sturdiness of the device.

Overall, HP have really mastered the needs of the classroom and have made life simple for educators with the x360 Education Edition.